About the River: Introduction 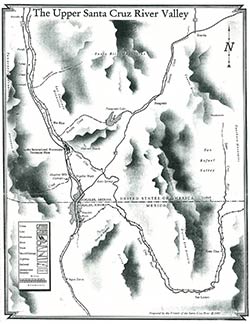 Map of the Santa Cruz River

An actual, wet river flows through the heart of Santa Cruz County, on the border of Mexico in southern Arizona. Considering the fate of most river systems in the southwest, the Santa Cruz River is a bit of a miracle. Humans first caused the downfall of the living river, and then were responsible for its resurrection. It once again brings life and special meaning to our valley. And again, we hold its future, and all the benefits it provides to us, in our own hands.

The river slides through dense stands of cottonwood and willow. Flanking these gallery forests, the remnants of mesquite-dominated riparian “bosques” (Spanish for woodlands) cover the soft, deep soil with elderberry, hackberry, ash and walnut. Native fish swim in the river’s gentle current. Fox, deer, raccoons and the occasional cougar drink its cool water and find or catch their food here. A multitude of birds gorge on the food its plants produce and nest in the sheltering foliage. Although it’s only inches deep in most seasons, the Santa Cruz’s influence is outsized. Its green lushness stands in stark contrast to the adjacent hills that struggle to host sparse desert grasses, prickly shrubs and stunted trees on their thin rocky soils.

Download a free .pdf Map of the Santa Cruz River.